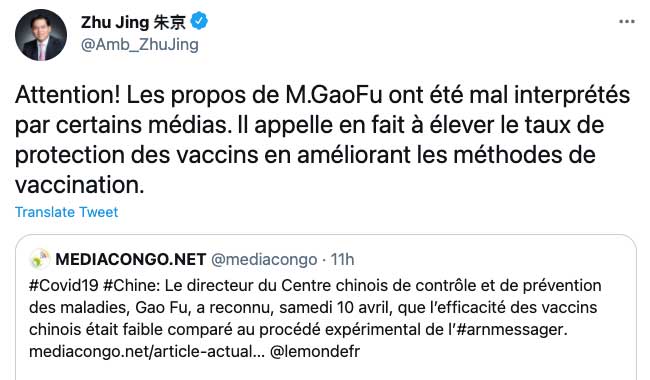 China’s normally bombastic diplomatic Twitter accounts in Africa were uncharacteristically silent on Monday with regards to the controversy that broke out over the weekend when Gao Fu, the director of the China CDC, acknowledged that Chinese vaccines are not as effective as the Pfizer and Moderna jabs.

Typically, when negative stories about China fill U.S. and European media, as this one did, China’s diplomatic accounts rally to the defense. But in this case, only Ambassador Zhu Jing in the Democratic Republic of the Congo and the spokesman for the Chinese embassy in Egypt posted any rebuttals. 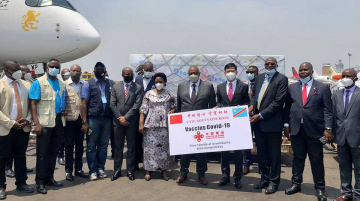 For the first time, the DR Congo took delivery of a donation of Chinese-made vaccines. A shipment of 400,000 doses of Sinovac and an equal number of syringes arrived on Wednesday at the ... 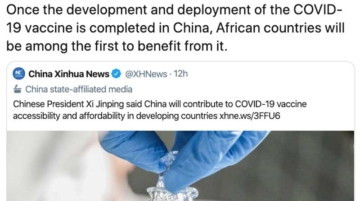 Chinese diplomats in Africa are reaffirming President Xi Jinping’s pledge to make a COVID-19 vaccine available to people across the continent once it’s tested and ready for distribution. Fang Yi, the political attaché ... 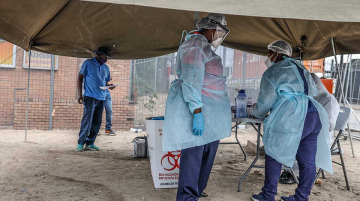 A shipment of 200,000 Chinese-made Sinopharm COVID-19 vaccines is scheduled to land in Zimbabwe next Monday and will be used to kickstart the government’s national vaccination drive. Information Minister Monica Mutsvangwa told reporters on ...
Previous Story: Columnist: Ghana President Akufo-Addo’s “Beyond Aid” Campaign Apparently Doesn’t Include Donations From China
Next Story: CSIS’s Judd Devermont Has Two Recommendations For How the U.S. Should Meet the Challenge of China’s BRI in Africa