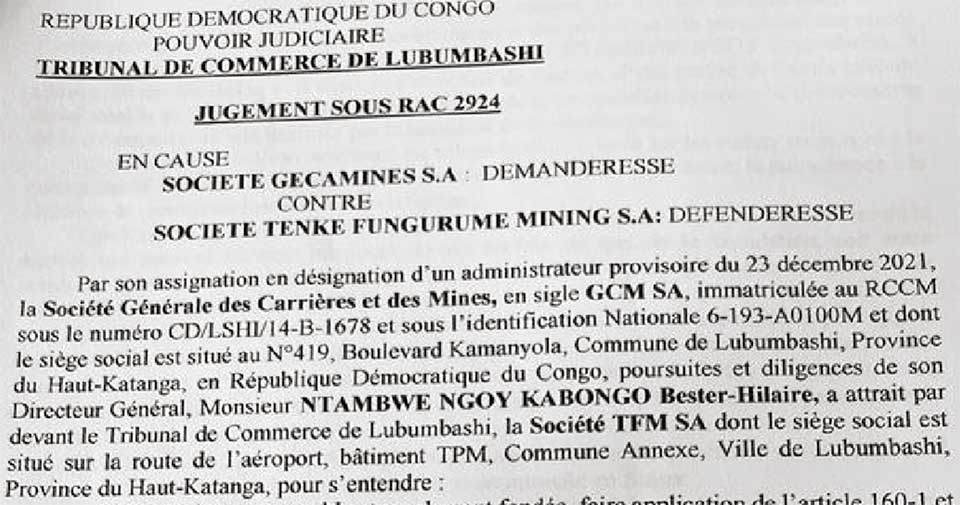 Photo of the two-page ruling by a commercial court in the DRC that suspended China Moly's management of the TFM cobalt and copper mine. Image via NY Times.

A court in the Democratic Republic of Congo on Monday temporarily took away the control of the world’s second-biggest cobalt and copper mine from its Chinese owner. It appointed a temporary administrator to run the Tenke Fungurume mine for six months, sidelining the Chinese mining giant China Molybdenum (‘China Moly.’) The ruling came at the request of Gécamines, the DRC state mining company, which owns a 20% share in the mine.

The decision follows months of wrangling between the government of President Felix Tshisekedi and China Moly over allegations that mineral reserves had been underreported, and that the Chinese company owes the government royalty payments. China Moly has denied these charges.

The decision has major implications for the rest of the world. Cobalt is one of the most important minerals for the production of electric vehicle batteries. As demand for non-combustion cars increased, so has concern in major manufacturing centers about China’s control over the global cobalt supply. An estimated 60% of cobalt mining and 80% of cobalt refining are run by Chinese companies.

The DRC has the world’s largest cobalt reserves, and the Tenke mine is one of its largest employers, with about 7,000 workers and contractors. The court appointed Dr. Sage Ngoie, a Congolese engineer, as the mine’s temporary caretaker. He has refused to comment on how he’ll run the mine. China Moly’s tenure has seen mounting allegations of worker safety violations. The company denied these allegations, saying critics were trying to discredit it.

The ruling comes as a surprise because relations between the Chinese mining giant and Tshisekedi had seemed to be recovering after a contentious 2021. The president joined China Moly executives for a friendly photo-op late last year. However, this development seems to indicate that the same isn’t true for its relations with the courts.

The dispute comes as the Tshisekedi government is undertaking a wider re-examination of mining contracts. In August a commission was appointed to measure reserves in order to ‘fairly lay claim to [its] rights.’ Gécamines has been a key driver of this process, with several of its executives sitting on the commission.

NGO Report: DRC is the “Loser” in the Sicomines Mega-Mining Deal With China 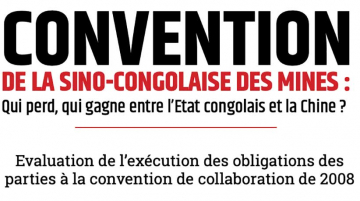 The DR Congo will be saddled with debt and poor quality infrastructure as a result of the faulty 2008 deal between the state-run mining company Gecamines and a consortium of Chinese investors, 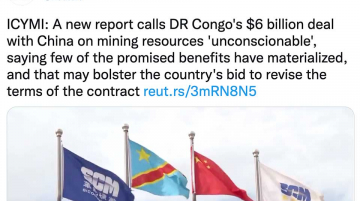 It sounds like the soon-to-be-released report by the Congolese branch of the Extractive Industries Transparency Initiative (EITI) is going to be unsparing in its criticism of the 2008 Sino-Congolese deal that created the ... 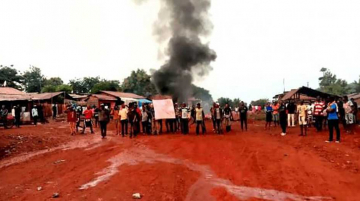 Protests erupted this week in the far northeastern Congolese province of Haut-Uélé where small-scale miners rallied against the growing presence of Chinese mining companies in the region. The marchers, mostly young men, are upset ...
Previous Story: Sino-European Competition for Influence in Africa
Next Story: China Opens Door to B3W Cooperation