Few African countries have closer links with China than Zambia. The relationship goes back decades and Chinese investment in Zambian copper mines have led to both economic growth and an anti-Chinese backlash. The recent arrest of four Chinese mining technicians on charges of sex with underage prostitutes is pushing this relationship into uncomfortable new territory.

The miners are bored, the local women are poor – as I say, the math was pretty simple during the American gold rush and it is pretty simple in the African shantytowns surrounding big mines.

The sexual math of mining is pretty simple. Mining overwhelmingly takes place far away from urban centers. Mines overwhelmingly employ men. There isn’t a lot for these men to do during their free time, because the mine is so far away from the city. The local women don’t have many options, because extractive industries don’t tend to employ many unskilled women and they don’t add much to the local communities. What follows is what a friend of mine recently called ‘the less-celebrated kind of foreign direct investment’. The miners are bored, the local women are poor – as I say, the math was pretty simple during the American gold rush and it is pretty simple in the African shantytowns surrounding big mines.
However, nowadays most large-scale extractive industries are dominated by multinational corporations and here the situation becomes complicated fast. Throw in the rhetoric of neo-colonial exploitation and you have an explosive combination of cultural difference, historical resentment and sex. Four Chinese technicians recently became the center of exactly this kind of miasma when they were arrested for having sex with underaged prostitutes in Zambia. The four – two carpenters, a bricklayer and a welder – worked for the China Non-Ferrous Metals Mining Group in Luanshya, a poor shantytown in Zambia’s Copperbelt. They are currently in jail and face anything from fifteen years to life with hard labour for indecent assault. The whole situation is clearly quite sad and sordid, but what intrigued me is that while the prosecution is basing its case on the fact that the young women were younger than sixteen, Zambia’s legal age of consent, the Zambian press seems to assume that they offered their services willingly. And this is far from the only case of underage prostitution in Zambia’s Copperbelt region – in fact, the implication seems to be that it is not only routine, but routinely ignored – one aspect of the desperate times facing this Copperbelt town. Some of the community members interviewed made it clear that the only reason this particular case is getting this level of attention is because the defendants are Chinese.
I don’t particularly wish to defend the Chinese men. If they’re guilty, they’re guilty of doing something despicable, even if these girls offered themselves up. But it also seems to me that these technicians have haplessly triggered some kind of post-colonial resentment bomb where sex and historical trauma become the fuel for a press bonfire. What makes it more symbolic is that China has in the past stoked exactly this kind of bonfire.
In 2002 a Chinese businessman was staying in a hotel in Zhuhai when he wandered into a massive orgy involving 400 Japanese businessmen and 500 local prostitutes. The next day the hungover Japanese businessmen woke to nationalist outrage on front pages across China. The outrage was based on an unfortunate detail – the orgy took place on the exact anniversary of the Japanese invasion of China in 1931. It is unclear to which extent the Japanese businessmen were aware of the symbolic significance of the date of their shindig. However, the mix of sex and history, particularly a narrative of historical victimhood, were like gasoline and birthday candles – a perfect recipe for a bad party. In the end it didn’t really matter whether they knew or not. In the bigger context of Japan’s history in China the scandal took on a life of its own. It drew attention all over East Asia and the Japanese government was forced to apologize.
China’s lightning growth has created a new category in international relations – the aid recipient turned aid donor. To me the sex scandal in Zambia seems like a warning to China as it engages more with Africa: no continent on earth has a bigger historical chip on its shoulder than Africa. Nowhere else is the grappling with historical victimhood closer to the surface. With more Chinese moving to Africa, with more rural underdevelopment coming face to face with Chinese workers with money, and especially with African journalists and politicians (like Zambia’s own Michael Sata) describing the China-Africa relationship as a new form of colonialism, we can expect many more sex-and-history bombs in the future.
ZAMBIA : Chinese Underage Sex Scandal Sparks Emotive Debate – IPS ipsnews.net.
‘I stepped out of the lift and into an orgy’ – Telegraph. 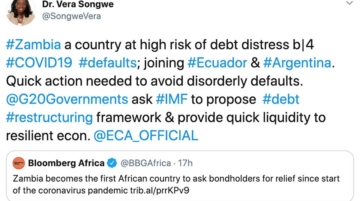 News of Zambia’s request to postpone payments on three Eurobond notes prompted immediate reactions from stakeholders in the financial services sector, economic policymakers and journalists.  Here’s a sampling of the reactions on Twitter: “Sad. It’s ... 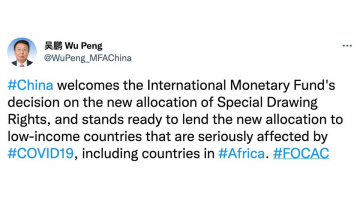 Ghana Tries to Defend Itself Against Debt Critics 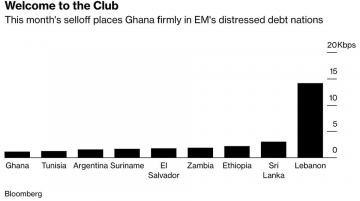 The Ghanaian Finance Ministry is angrily refuting recent reports by Bloomberg News reflecting the increasingly widespread perception in the global financial community that the country is now over-extended and facing debt distress. ‘There are some ...
Previous Story: Al Jazeera’s King Cobra and the Dragon
Next Story: 3Qi: China's Landmark Sicomines Deal in the DR Congo