In recent years, China’s distant-water fishing (DWF) has expanded rapidly, particularly off the coast of West Africa, attracting the attention of NGOs and the international community. In April 2020, the Chinese government began to implement significantly stricter Regulations on the Management of Distant Water Fisheries. The new law features strengthened monitoring measures and harsher penalties for violation. Important questions nonetheless remain as to what is driving this move, whether the new rules can effectively put a brake on China’s illegal, unreported and unregulated (IUU) fishing in the region, and what the Chinese and African governments can do to improve the sustainability of these fisheries.

Why Are China’s Fishing Boats Venturing Into Distant Waters?

China’s distant water DWF industry is driven by both economic and strategic factors. In the 1980s, it became evident that China’s domestic fish stocks were depleting rapidly, so aquaculture and DWF became an important way to reduce the pressure on declining domestic resources. DWF is also of strategic importance to China as an indispensable part of China’s “going-out” strategy, a strategy from the 1990s to encourage its enterprises to invest overseas and expand their influence globally and especially on the African continent. China’s DWF grew from nearly zero in 1985, to 2.6 million tons in 2018. Official statistics indicate that there are 170 DWF enterprises, operating 2,654 vessels. The real numbers may be much higher, with one 2020 report estimating the fleet to be 16,966 vessels, which is five to eight times larger than the previous estimates. (Gutiérrez Miren et al., 2020).

The Chinese DWF fleet is characterized by three key features:

What Is the Situation of West Africa’s Fishing Industry?

West Africa is one of the world’s most important fishing zones. Fisheries account for 20% of primary production and are an important source of nutrition for coastal populations in the region (Belhabib et al., 2015). Marine productivity has declined continuously due to decades of over-exploitation, which is now exacerbated by ocean warming caused by climate change. The average catch per unit of effort declined 34% from 1950 to 2010. As industrial vessels are 11 times more efficient than artisanal vessels (Belhabib et al., 2018), the decline in artisanal fishing has been much steeper.

The waters of West Africa currently produce an estimated annual average catch of 10.5 million tons, with China and the EU accounting for 20% and 15% respectively.

What Do We Know About China’s DWF in West Africa?

Ghana offers an instructive case study that illustrates the configuration and governance of Chinese trawlers and illuminates the relationships among Chinese fishermen, local artisanal fisherman, and the local government.

China is widely involved in Ghana’s commercial fishing through opaque arrangements. Although accurate data is unobtainable, research and interviews estimate that 80-95% of the trawlers operating in Ghana have links with Chinese interests (Penney et al., 2017) (EJF, 2018).

Conflicts arise between Chinese trawlers and local artisanal vessels not only due to scarcity of resources but also over destructive fishing methods. Chinese fishing boats often use bottom trawling, whereby a net is dragged across the seabed. This can entail significant bycatch (e.g. of juvenile fish, sharks, and sea turtles), damage the seafloor, and harm coral reefs. Trawling can also disturb areas where fish congregate, which artisanal fishers have traditionally used to identify key fishing grounds.

In Ghana, a group of fishers/collectors known as “Saiko” has emerged as an informal means of transshipment, selling bycatch caught by Chinese trawlers to the local markets and artisanal fishers. An estimated 100,000 tons of fish are traded through this system, which has been criticized by traditional fishers on the basis that these “newly acquired wealthy” don’t invest back into the local community (Penney et al., 2017).

Finally, government corruption is a key challenge for sustainable fisheries management. Local officials may sell excessive fishing permits or take bribes to turn a blind eye on illegal activities. It is also possible that African governments may be reluctant to make arrests or sanctions to avoid jeopardizing Chinese development aid (Mallory, 2013).

What Is China Doing to Address the Challenges?

China has passed a number of domestic laws and used policy tools such as the Five-Year Planning (FYP) to promote and regulate DWF. China has also been transforming the policies regarding bottom trawling as well as harmful subsidies for domestic fishing. Policies were published to cut fuel subsidies by 40% from 2014 levels by 2019, reduce the size of the fleet and optimise the structure of the fishing industry.

In 2017, a major revision of the Distant Water Fishery Supervisory Regulation was published, which entered into force in April 2020. This revision featured four main changes:

2021 is an important year to take concrete steps forward. In 2021 China will host the Conference of the Parties (COP 15) to the Convention on Biological Diversity (CBD). The 4th Summit of Forum on China-Africa Cooperation (FOCAC), the primary platform and mechanism for China-Africa engagement, will also take place in Senegal this year, the first time the summit has been hosted in West Africa. Chinese and African ministries of agriculture will also meet at the bi-annual Forum on China-Africa Agriculture Cooperation (FOCACA). These events are windows of opportunity to raise IUU fishing as a priority for China and West African countries.

Lu Xinqing is an environmental policy analyst based currently based in Berlin. Previously, she was in Nairobi where she served as the China-Africa Cooperation Program lead for the Alliance for a Green Revolution in Africa.

Eric: Hello and welcome to another edition of the China in Africa podcast. I’m Eric Olander and as always, ...

Conservation Needs to Get Back on the China-Africa Agenda

China appears to be launching a significant expansion of its distant water fishing fleet around the world and most notably in Africa. Six supertrawlers are already docked in Liberia and three new vessels ...

Sierra Leone’s Fishing Minister: ‘There Must Be Development’ 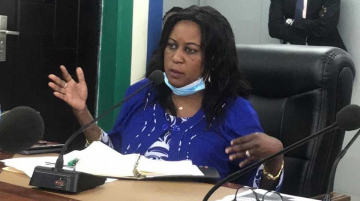 The deal between the government of Sierra Leone and Chinese entities to build an industrial fishing harbor on 100 hectares of beach and rainforest reads like a textbook example of why China remains ...
Previous Story: Does China’s White Paper on Development Mean Anything for Africa?
Next Story: Why the Neocolonialism Story Will Never Die