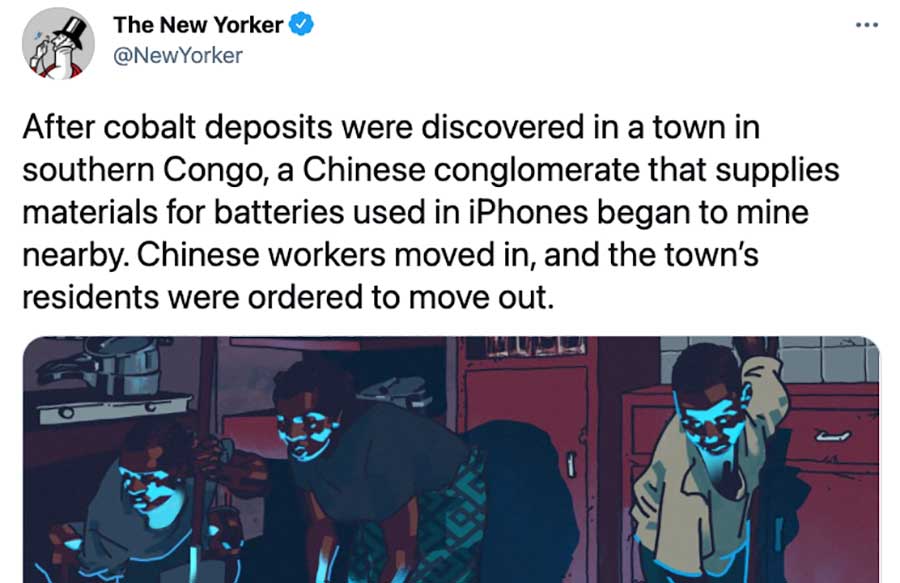 The New Yorker magazine published a sweeping long-form article in its latest edition that delves into the painful history of Congolese cobalt — a metal that is now indispensable for any consumer who owns a mobile phone and a strategic resource that is in the middle of a burgeoning great power rivalry over who will control strategic supply chains in the 21st century.

Excerpt:
China and Congo have a long history. During Leopold’s reign, Chinese workers were shipped to Congo to help build the national railroad. In the nineteen-seventies, Mobutu turned to Mao’s regime for technical collaboration on infrastructure projects.

By the nineties, the Chinese were becoming the bosses: the Beijing government and myriad Chinese businesses began making heavy investments in Africa, particularly in resource-rich and regulation-poor countries like the Democratic Republic of the Congo. Peter Zhou, a Chinese-born financier who has worked on a few mining deals in Congo, said that in such countries “there is corruption, there is lack of the rule of law, which gives you more autonomy to be entrepreneurial.” (Zhou emphasized that he hadn’t directly witnessed or engaged in corruption.)

In 2007, Joseph Kabila made a six-billion-dollar infrastructure deal with China that included a provision allowing the Chinese to extract six hundred thousand tons of cobalt. 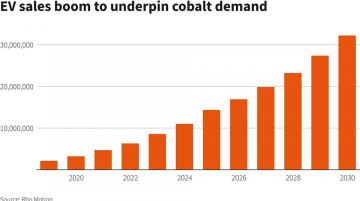 Soaring demand for electric cars and trucks is sparking a buying frenzy for the critical ingredients used to make the batteries in those vehicles, namely cobalt. Prices for the metal ...

This Chart Explains Why the U.S. Just Invested $25 Million in a Company That Will Help Diversify Its Supply of Cobalt 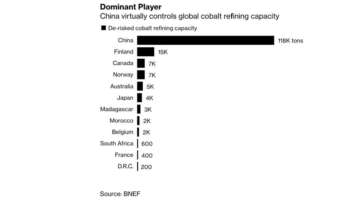 The United States Development Finance Corporation invested $25 million in a company that will help to develop a Brazilian nickel and cobalt mine. The U.S. and a growing number of European countries are ...

In 5 Years, the Battle Over Cobalt is Going to Intensify… a LOT! 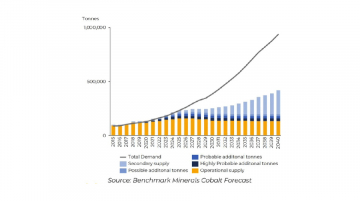 There are just five years left before the demand for cobalt, a critical metal used to make the batteries in electric vehicles, is going to outstrip the known supply of this strategically vital ...
Previous Story: China Controls 90% of the World’s Manganese Market, Another Strategic Ingredient for Electric Vehicle Batteries
Next Story: Almost a Third of the World’s Cobalt, Mostly From the DRC, Went to China Last Year